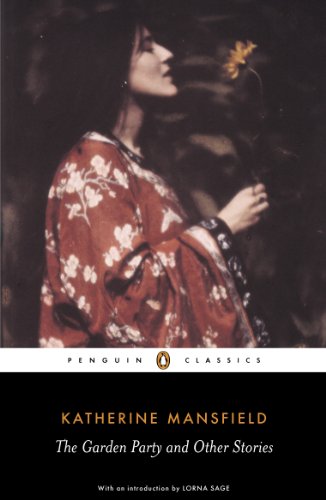 In fiction, the rules of point of view are strict.  You either write in the first person – “I did this, I looked at that,” and keep to it throughout; or you write in the third person, through a particular he or she, with only sparing excursions to the viewpoints of other characters.  Certainly, changing point of view in the middle of a scene is a no no.

Then along comes Katherine Mansfield.   Sent by her prosperous New Zealand family to a finishing school in London, she was meant to imbue a smattering of literature suitable for a polite young lady.  Unfortunately she developed a genuine passion for books and art.  Returning to New Zealand in the early 1900s she became unmanageable, had a few lesbian affairs, and ended up living a Bohemian life back in London.

This is by way of introduction to a striking use of point of view I have just come across in a Katherine Mansfield short story called At The Bay.  Early in the story we join Stanley Burrell who has got up early, and is off for a swim in the sea before work.  We quickly  see that Mr Burrell is a stuffy character who likes everything just so. He doesn’t want to be disturbed in his swim by the easy-going Jonathon Trout.   Point of view flits around between the two men, until Stanley goes grumpily back to his house and moans about not finding his bowler hat and walking stick in their rightful place.  We see him from Aunt Beryl’s point of view, only to be dragged back into Stanley’s panicky mind as he searches for hat and stick.

Then he finally leaves for work.

“The relief, the difference it made to have the man out of the house.”

I felt the relief in switching to the perspective of Beryl and then to that of the serving girl Alice.

For most writers switching point of view creates confusion, and interferes with the process of getting involved with a character.  Remarkably, Katherine Mansfield actually breaks this rule to increase involvement, to experience the relief of a sudden liberation from a certain way of looking at the world.  She makes you realise that sometimes people see the world not through their own eyes, but through those of someone more dominant.  When that person leaves, the world looks different.

It does make you wonder whether our intolerance of alternative view points in fiction reflects a certain Stanley quality in us all.

As America inaugurates its new president I’ve been reading Edith Warton’s The Age of Innocence.

The Age of Innocence portrays New York society in the 1870s, just before the advent of the modern age. Life is hemmed in by social niceties. By the end of the book, however, there is proof of the old truth that restrictions we struggle against when young, leave a hole when they are gone. 1870s New York for all its hypocritical tendency to gloss over truth, understands human nature. Citizens in the environs of Washington Square work as a team to corral humanity’s wilder impulses and unpredictability. And of course, within a few decades those wilder impulses were to destroy the Europe where New Yorkers purchased their dresses and took their cultural holidays.

The Age of Innocence is beautifully written, portraying a lost world with a wonderful eye for detail. Like 1870s New York itself, the story plays out elegantly, with huge emotion struggling beneath the surface. That’s what I liked most about the book. I’d just come from a modern story where the emotion was in your face, and the violence graphic. The contrast with The Age of Innocence was striking, and I have to say, welcome. There is violence, but it sits tightly controlled in a social pressure cooker. There is emotion, but it is subdued like a wild horse broken by a trainer. There are victories without cheering, and shattering defeats that pass without tears.

The Age of Innocence New York becomes more relevant to the modern age the further it disappears into the past. It sits there as it did in Newland Archer’s memory, deeply imperfect while he lived it, but providing a counterbalance to the modernity that replaced it.

The month of January takes its name from the Roman god Janus. If you’re feeling confused at the beginning of the new year, then Janus is the god for you. In Roman mythology he was the ruler of both endings and beginnings. Just for good measure Janus was also in charge of transitions, of the middle ground, between such opposites as barbarism and civilisation, city and countryside, or youth and adulthood. So you could say he was in charge of everything.

Out with the old, in with the new, business as usual – it was all the same to Janus.

Janus was not the senior god of the Roman world, but he was perhaps the most powerful. He had to be called upon at the beginning of every religious service involving any other god. After all he ruled gateways, including the door through to the godly realm. So in 2017, whether you are dealing with endings or beginnings or anything in between, January is named after a god who kept an eye on all those things, and treated them just the same.

As 2016 ended, I decided to read Ernest Hemingway’s famous book about the Spanish Civil War, For Whom The Bell Tolls.  On the first page, he quotes those famous lines from John Donne:

No man is an island,
Entire of itself,
Every man is a piece of the continent,
A part of the main.
If a clod be washed away by the sea,
Europe is the less.
As well as if a promontory were.

In 2016, as part of a worldwide trend towards division, the UK was a clod washed away by the sea.  Teresa May has since told us to be unified, but at what stage does a group of people become unified?  At what point do borders truly reflect the oneness of the people within them, so that they can say, “this is who we are”?

Reading Hemingway I would say, never.

The novel’s central character is Robert Jordan, who in an earlier life taught Spanish at an American university.  Now like many other idealistic young men in the 1930s, he has joined the International Brigade of volunteers fighting the fascists in the Spanish Civil War.  He has gone behind enemy lines to help a partisan band of republican Spanish.  Finding a situation that is not exactly black and white, he reflects on how hard it is to find unity amongst people:

That is the reality of people living together.  There is no final cohesive unit of humanity.  People chase after a secure sense of identity when such a thing does not exist.

The book pulls apart all the usual ways people consider themselves to be together.  National identity means nothing; comrades in a life or death struggle seem just as likely to shoot each other, as they are to shoot at the enemy.  Even an individual seems divided.  Robert Jordan has many arguments with himself.  But set against all this are moments which can only be described as transcendent in the unity they describe. These blissful interludes involve a love affair between Robert Jordan and Marie, a young woman the partisan band have rescued from fascist captors during a raid on a train.  The pressure of the situation drives these two together, so that in them we see the other side of the coin. Unity can exist in division.

In a world that wants to divide itself in pursuit of identity, For Whom The Bell Tolls should be required reading.