Last week I received a report on my new novel. As usual with these things I had got my hopes up. There would not only be publication, there would be a film. We could move house and my day job would be a distant memory. As usual this did not happen. The editor, amongst other things, said my book was not really science fiction.

Science fiction is writing set in the future dramatising the impact of various new technologies. Ok, but there’s a recent science fiction novel by Ian McEwan, which is set in the past, the 1980s to be precise, a reimagined 1980s where there are robot companions. So, sci-fi can be set in the past or future, and it involves futuristic technology; except that sometimes the tech in the story is not futuristic, it’s rather more Victorian, as in the sub genre known as steam punk. Sometimes there isn’t really any tech at all, which gives a us another sub genre known as speculative fiction, which focuses on social change. Often these social changes are portrayed in the future, except where they involve some kind of reimagining of the past, as with Ian McEwan’s book, which is a type of science fiction usually referred to as alternate history. Sometimes the future and the past are muddled up, as in Star Wars, where people fly around in space ships, even though we are told right at the beginning that everything happened long, long ago. Sometimes the story is set in the present, but fantastical elements come in from some more powerful, futuristic place, as in a super hero story. Then of course there are occasions when the story is not set in past, present or future but in a totally different universe, which takes us across a border into what is often called fantasy.

So where are we? Science fiction seems to be so many things that we might agree with writer Damon Knight who describes science fiction as “what we point to when we say it.”

So science fiction is a great big open goal. The goal keeper is confused, looking as though match preparation involved drinking large amounts of alcohol and not sleeping for three nights. You are taking a penalty and just have to kick the ball past that swaying, stumbling goalie, into the waiting net. So I take my run up, go for the kick, trip over the ball and send it flying backwards. Picking myself up, I wonder how this happened. How is it possible to write a science fiction book which misses that great big science fiction goal? I must have written the only science fiction book in history which is not science fiction. That must be some kind of achievement. Damon Knight could say that science fiction is anything except that book Martin Jones wrote.

In The Hitchhiker’s Guide to the Galaxy, Arthur Dent, an exile from a destroyed Earth tries to use a computer to recreate a nice cup of tea.

“After a fairly shaky start to the day, Arthur’s mind was beginning to reassemble itself from the shellshocked fragments the previous day had left him with. He had found a Nutri-Matic machine which had provided him with a plastic cup filled with a liquid that was almost, but not quite, entirely unlike tea. The way it functioned was very interesting. When the Drink button was pressed it made an instant but highly detailed examination of the subject’s taste buds, a spectroscopic analysis of the subject’s metabolism and then sent tiny experimental signals down the neural pathways to the taste centres of the subject’s brain to see what was likely to go down well. However, no one knew quite why it did this because it invariably delivered a cupful of liquid that was almost, but not quite, entirely unlike tea.”

I do wonder if publishers are sometimes like Nutri-Matic machines. They try to conduct spectroscopic analyses on potential readers’ brains, metabolisms and literary taste buds, to ascertain what certain groups might like to read. Apparently the sci-fi crowd are not likely to favour stories about an imagined future for the royal family. That’s what my book is about, by the way. My story imagines a future world with a single government, which has adopted a version of what was once the British royal family as a figure head monarchy. The King makes plans to extend the monarchy to Mars, in an attempt to ease tensions between Mars and Earth. The young heir to the throne thinks this whole plan is crazy and wants out. Oh, and there’s quite a lot of rowing, as in the University Boat Race, where in a good year there’s a sinking.

Science fiction is apparently a lot of things, but not this. I was asked to consider how many science fiction readers out there are royalist rowing fans? I could say that the Boat Race has twice as many viewers as the British Grand Prix, and most people in then UK want to keep their monarchy; but let’s not get into statistics. It is true that the sci-fi demographic might not buy into rowing royals. But who knows? Sometimes a Nutri-Matic machine will do all its clever brain and taste bud checking and give you something which is almost but not quite entirely unlike tea. And Arthur Dent wanted tea. Maybe this demonstrates that in the end, tea just has to be itself. It can change for an individual drinker, but then it’s not tea anymore. My story is the one I wanted to write, set in the future, playing out in traditional locations surviving from the present day, as people try to cope with the new whilst maintaining the old. I don’t know about the future, but I do know about the contradictory ways I react to change, and the way I see people in general reacting to change. That’s what drove me to write my royals in the future story.

Best wishes, whether you are a writer or a reader. 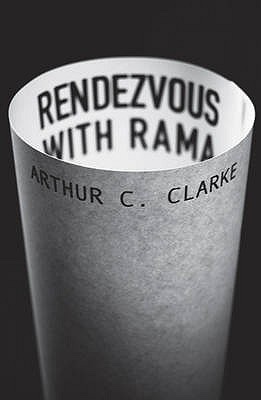 Rendezvous With Rama describes the exploration of a vast alien space ship. This vessel takes the form of a spinning cylinder, fifty kilometres long by twenty kilometres wide. Centrifugal forces anchor a miniature world of cities, fields and seas against its inner surface. With Rama apparently abandoned, this is a detective story where the explorers look for clues to its origins and intentions.

Let’s start with the good stuff.

For me, the best thing about this book was the idea of Rama. I found all kinds of thought provoking contradictions in its circular topography. Rama can actually cause you to ponder on space and time, specifically whether they are rather more circular than linear. We live on a world with a surface that bends away from us over the horizon, which makes us prone to thinking in terms of straight lines. But by turning things inside out, by taking away the horizon and letting the landscape sweep around overhead, we get a more intuitive model of how things might really be.

So that was the positive. Now we come to the negative. I have seen Arthur C. Clarke’s prose described as “workmanlike” or “functional”. To describe my view of his writing, I suggest you imagine a technically minded 1970s school boy, with odd views on women, marriage, and – bizarrely – farming. After an A in a physics exam goes to his head, he decides to write an adventure story in which he and his thinly disguised friends explore an alien space ship. But, damn it, for the most part I still enjoyed the story because of that great revolving idea of Rama.

Books like this show that people are often more interested in ideas than good writing. There’s even a name for a type of book which is built around a single idea, which can be expressed in a few words, or even in one word – it’s called high concept. Lots of Hollywood blockbusters are high concept: Planet Of The Apes, Snakes On A Plane, Jaws, Speed. The power of an idea is sobering as you sweat over editing your adverbs. If you haven’t got an idea that appeals to people, then polished prose probably won’t help. But I suppose, on a more reassuring and philosophical note, if the universe is circular, then there’s a chance that even poor writing can go all the way round and meet up with an interesting story somewhere at the back. That’s what seems to have happened with Rendezvous With Rama. 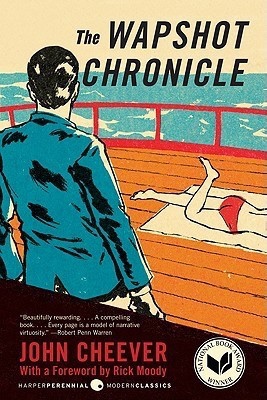 What is this book about? It’s about an eccentric New England family. Second question – what exactly is a family? That’s not so easy to answer. The Wapshot Chronicle sets out to show that the lines we draw between families or types of people in general, are like the lines the Babylonians or the Greeks drew between stars, creating heavenly hunters, crabs or scorpions. The fact is, those patterns are not really there. No real crabs sit in the night sky.

“Coverly has the nose,” Cousin Mildred said. “I’ve told him that I could have picked him out in a crowd. I mean I would have known that he was a Wapshot.”

So a family might have a recognisable nose. But what about people marrying in? They don’t have the nose, but they are still part of the family. What does Cousin Mildred have to say about that? Here she is talking about her husband:

“Harry’s mad for New England. He’s an adorable man and a wizard in the carpet business, but he doesn’t come from anyplace really. I mean he doesn’t have anything nice to remember and so he borrows other people’s memories. He’s really more of a Wapshot than you or I.”

“The surf spoke in loud voices of wrecks and voyages and the likeness of things; for the dead fish was striped like a cat and the sky was striped like the fish and the conch was whorled like an ear and the beach was ribbed like a dog’s mouth and the movables in the surf splintered and crashed like the walls of Jericho.”

The Wapshot Chronicle is an interesting, funny, sad family chronicle which makes you wonder what a family is. When the social lines people draw threaten their happiness, when they give rise to bigotry and intolerance, for example, then a reminder of their arbitrary nature is timely. John Cheever’s reminder was timely in the straight-laced 1950s when the book was first published, and equally valuable now.