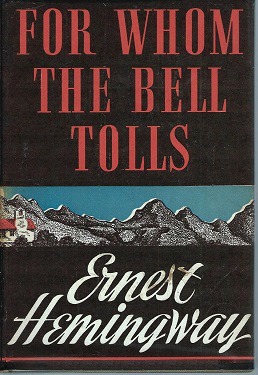 As 2016 ended, I decided to read Ernest Hemingway’s famous book about the Spanish Civil War, For Whom The Bell Tolls.  On the first page, he quotes those famous lines from John Donne:

No man is an island,
Entire of itself,
Every man is a piece of the continent,
A part of the main.
If a clod be washed away by the sea,
Europe is the less.
As well as if a promontory were.

In 2016, as part of a worldwide trend towards division, the UK was a clod washed away by the sea.  Teresa May has since told us to be unified, but at what stage does a group of people become unified?  At what point do borders truly reflect the oneness of the people within them, so that they can say, “this is who we are”?

Reading Hemingway I would say, never.

The novel’s central character is Robert Jordan, who in an earlier life taught Spanish at an American university.  Now like many other idealistic young men in the 1930s, he has joined the International Brigade of volunteers fighting the fascists in the Spanish Civil War.  He has gone behind enemy lines to help a partisan band of republican Spanish.  Finding a situation that is not exactly black and white, he reflects on how hard it is to find unity amongst people:

That is the reality of people living together.  There is no final cohesive unit of humanity.  People chase after a secure sense of identity when such a thing does not exist.

The book pulls apart all the usual ways people consider themselves to be together.  National identity means nothing; comrades in a life or death struggle seem just as likely to shoot each other, as they are to shoot at the enemy.  Even an individual seems divided.  Robert Jordan has many arguments with himself.  But set against all this are moments which can only be described as transcendent in the unity they describe. These blissful interludes involve a love affair between Robert Jordan and Marie, a young woman the partisan band have rescued from fascist captors during a raid on a train.  The pressure of the situation drives these two together, so that in them we see the other side of the coin. Unity can exist in division.

In a world that wants to divide itself in pursuit of identity, For Whom The Bell Tolls should be required reading.