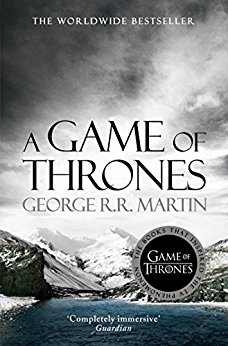 First a little history for you.   Folk tales took place in our world, even if their location was far away or long ago.  In contrast, fantasy authors since the nineteenth century have shunted their stories off into separate worlds, often helpfully mapped in the first few introductory pages.  This shutting away is a major characteristic of modern fantasy writing, illustrated by the fact that as of 2017, Wikipedia lists 202 fictional worlds created by well-known authors. It’s as though real life doesn’t have room for fantasy anymore.  Fantasy has been banished, like an eighteenth century convict sent to Australia.

A Game of Thrones appears to follow this familiar pattern.  The story is set in its own fictional realm, with maps provided of three fanciful continents, Westeros, Essos and Sothoryos.  However, the story opens with a more historical than fantastical feel. There are no wizards with pointy hats.  The powerful families of the book take advice from “maesters”, people who are like early scientists, studying the technical aspects of medicine, architecture, history, navigation and so on.  Old wives’ tales concerning lost magical forest dwellers do not impress them.  They have shut the old tales out of their minds.  In fact this shutting away of folklore is made literal, by a vast ice barrier.  This is a kind of Hadrian’s Wall, manned by a group of soldiers known as the Night’s Watch, blocking all access to the northern part of Westeros. It is not entirely clear what lies behind this fortification, beyond a sense of slowly developing threat. We hear stories of magical goings on, which the maesters airily dismiss.  An ocassional zombie-like creature emerges to do battle with the Night’s Watch.  It’s as though all the folklore of Westeros has been exiled behind that wall, just as fairy tales in the real world have been exiled to their own separate places. You get the feeling that the power of those tales is not happy to stay there.

Meanwhile in the medieval setting south of the wall, George R.R. Martin tells a well-handled tale of brutal, self-involved, incestuous politics.  There are complex meditations on the nature of power and virtue.  However, for me the real quality of the book is that underlying sense of old world legends and tall tales shut away, waiting to come back. If you were to write a book that was both modern fantasy and a thoughtful reflection on modern fantasy, then  A Game of Thrones would be it.