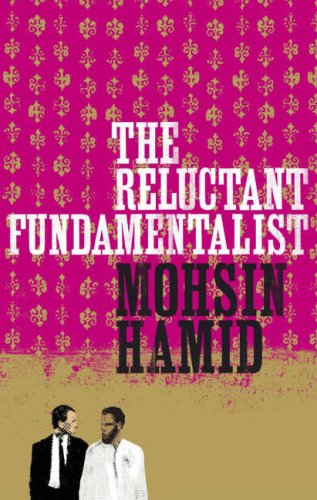 The Reluctant Fundamentalist is a one sided conversation between a Pakistani professor named Changez, and an unnamed American, taking place mostly in a street café in Lahore. Changez describes an education at Princeton, a subsequent short career at one of New York’s top business consultancies, a love affair with a beautiful American girl, and his eventual disillusion with the United States. All of this happens around the time of the 9/11 attacks on the World Trade Centre and Washington.

The conversation is enigmatic. Changez is a delightful host, unfailingly polite and obliging to the suspicious, surly American, who, we infer, is clearly worried that this whole conversation is some kind of set up. Is he imagining these threats? Is he ruining a lovely meal with a charming man due to some kind of delusion?

These is much delusion in this book. We see characters who classify fundamentalism as an insane state of mind confined to a few crazy religious people who come from somewhere vaguely east. Changez’s story, however, makes it clear that there are all kinds of fundamentalism, ranging from the business philosophy of New York consultancy firms, to the idealised love affairs of vulnerable young women. Confining the idea of fundamentalism to one set of circumstances and people is a fundamental misunderstanding.

The result of this misunderstanding is a kind of paranoid delusion. Just as Changez’s American dining companion imagines an attentive waiter as a possible assassin, America itself became delusional about terrorism after 9/11. The 9/11 attacks led to the deaths of 2990 people, which it goes without saying was a terrible thing. From 2001 until 2013 there were a further 390 American deaths from terrorism, almost all of them overseas. This compares to 406,496 deaths from American firearms in the same period – according to figures from the Centers for Disease Control and Prevention at the U.S. State Department. Deaths caused by Americans shooting themselves and each other, are 100 times greater than those resulting from terrorism. Yet it is the terrorist threat that Americans fear, while their own far more lethal guns and attitudes are expressions of “freedom”. The aim is always to find an outside threat, some other people to count as crazy fundamentalists. Changez tries to explain this to his guest:

This trend is only gathering force. CNN compiled the above comparison figures for terrorist and American gun related deaths in 2015. They did so at the encouragement of President Obama, following a mass shooting at an Oregon college. In 2016, millions of Americans decided it was a good idea to replace President Obama with a man who is only interested in creating outside threats against which he can rage.

All of these delusions sit behind the fictional, enigmatic meal shared by Changez and his American guest. Is this a peaceful meal or an attempted assassination? If the American’s suspicions are misplaced, might those suspicions themselves result in real trouble? Similarly, Pakistani fears could themselves lead to a violent outcome. Is the American reaching into his pocket for a phone or a gun? Is it wise to wait and find out? This might only be fiction writing, but this is a good place to explore the dangerous power of fictions as they collide with the real world.

The Reluctant Fundamentalist reminds me how important books are. This book is even more significant now than it was when first published in 2007. Books challenge stagnant patterns of thought and open up different points of view. Perhaps that’s why totalitarian leaders don’t like them.