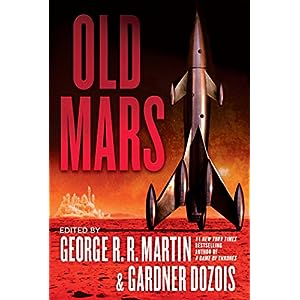 Old Mars is a collection of short stories, inspired by the pre-Mariner probe tradition of science fiction writing about Mars. There is a great introduction by George R.R. Martin about his youthful admiration for fanciful Martian tales. Then comes a selection of stories reflecting the influence of various twentieth century science fiction writers. Allen M. Steele, for example, sets the first story in a desert not unlike that of Nevada, complete with an Edgar Rice Burroughs themed resort. This resort is a reminder that we like to create fantasy worlds on Earth. So why not continue to create them on Mars.

I also enjoyed The Wreck of the Mars Adventure, which imagines seventeenth century pirate William Kidd sailing to Mars with the help of a scientist of the time. Kidd’s flying sailing ship had me thinking about how difficult it is to imagine the future. We usually only see what is to come in terms of technologies we actually live with.

The final story in the book was my favourite. Ian Macdonald imagines a future where Earth strikes back at the Martians of H.G. Wells who invaded west London in their tripod machines. The story follows a singer of popular song and light opera, his career on the decline, who finds himself in a concert party entertaining troops on Mars.

However, I didn’t find all of the stories so successful. King of the Cheap Romance was shoddily written. I don’t know if this was an ironic reflection on the poor standards of cheap romance writing. There is shoddy writing in the history of Mars literature. John Carter of Mars, listed as by Edgar Rice Burroughs, (actually by his son) uses a style known politely as “juvenile.” Joe R. Lansdale appears to write King of the Cheap Romance in the same style, and a sense of irony was not enough to get me through it.

Overall, I would recommend this book. It’s a good way to introduce yourself to authors you might want to explore further, and Ian Macdonald’s concert party story makes the book worthwhile on its own.