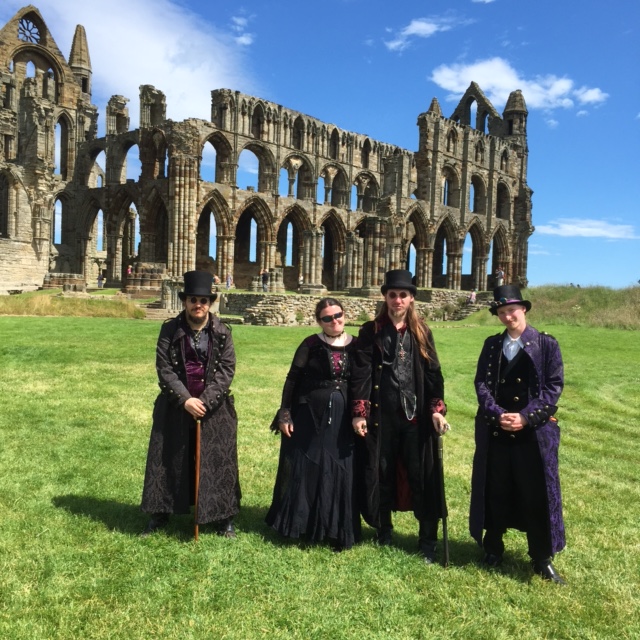 I visited Whitby Abbey this summer, and found a group of youngsters willing to dress up in many layers of black in thirty degree heat.  They were paying homage to Bram Stoker’s Dracula which has scenes set at the Abbey. Admiring such commitment  I read the book, and found myself introduced to a very proper Victorian gentleman named Jonathan Harker. As he travels east across Europe, he notices the trains get later and later. He can’t even imagine what the trains are like in China. It is a bit of a shock, therefore, when our conventional Englishman falls into the hands of a vampire living in a brooding castle.

Meanwhile, back in England Mr Harker’s fiancé is a Victorian stereotype of what women should be. Mina does her best to live up to this crazy ideal. She looks after her traumatised husband, following his escape from Dracula, and cleverly takes disparate records of vampire sightings, and puts them together to produce a coherent picture of what’s going on. But despite this contribution, her husband, and his group of male vampire-fighting vigilantes, announce in the most honourable of terms that a weak woman can have no part in fighting the enemy. Excluded from events, kept in the dark for her own peace of mind, Mina finds it difficult to sleep, no doubt the result of a suppressed sense of injustice. She allows the men to offer her a sleeping draught to help deal with nervous insomnia. Tellingly, it is while she is vulnerable, sleeping her drugged sleep, that a vengeful Dracula arrives in her bedroom.

Bram Stoker quietly pulls apart the apparent morality of his society, and shows how ordinary, proper life can actually push people into the land of the living dead. This was the aspect of Dracula I admired, equivalent to that modern Shaun of the Dead irony, where zombies invade an English suburb populated by people who are pretty much zombies anyway. Bram Stoker’s sentimentality is cloying at times, particularly in the second half, but thankfully there is always that undercurrent of satire, showing that Dracula’s castle isn’t so far from the Home Counties.

The Bram Stoker fans I met this summer were from Birmingham.  They looked great and kindly allowed me to take a few photos.