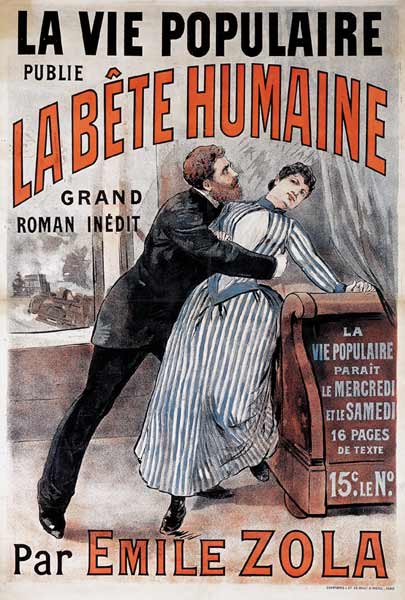 La Bete humaine reminds me of the Thomas the Tank Engine books.  There are a lot more stabbings, suicides and sexual encounters in La Bete humaine, but essentially Emile Zola and the Rev W. Awdry are writing about the same thing.  They both parallel human life with steam trains and the rail systems they run on.

Awdry presents his engines as having personalities of their own, who have to accept the direction of their driver if they are to find happiness and fulfillment.  The Thomas story that made the biggest impact on me as a youngster was a story about Gordon, the most powerful and proudest locomotive of them all.  I recall one time he had a new paint job, and was so pleased with it that he steamed into a tunnel and refused to come out, not wanting the weather to spoil his lovely blue paint.  Eventually the Fat Controller walls Gordon up in his refuge, and only allows him out when confinement in the tunnel had reduced him to a stiff, grimy, rusty shell of an engine.  That’s one way to punish the sin of pride.

In La Bete humain the trains are also presented as having personalities.  La Lison is a good, dependable engine, who until a terrible night of overwork in a snowstorm, has a loving relationship with her driver.  Engine 608 is a headstrong youngster who needs careful handling.  Like Awdry, Zola draws parallels between the life of steam engines, struggling against or cooperating with their drivers, and the lives of human beings, who struggle against or cooperate with the forces shaping their destiny.  The difference between Zola and Awdry lies in the nature of the driver, the controlling influence.   In the Thomas stories, we don’t really ever get to know the drivers.  They are an anonymous guiding presence whose wisdom in the end has to be accepted.  In Zola’s novel, the drivers can sometimes provide wise and gentle guidance.  At other times, they can be maniacs and drunkards who fight over women on the footplate.  Zola’s novel is much more modern and challenging in that sense.  It’s Thomas the Tank Engine for grown-ups.

However, in the final analysis I still think that Zola can offer the same reassurance as Awdry, the same sense that in accepting life, things can turn out right.  In the early pages, there is a short section where order somehow emerges out of chaos:

“It was all a jumble at that murky twilight hour, when it seemed as though everything should collide, and yet everything passed, and slid by, and emerged all at the same gentle crawl, vaguely, in the depths of the dusk.”

When I got to the end of the book, after Zola had pulled me through the most snarled of jumbles, I like to think the demoralised reader can at least remember those early lines where order somehow emerges out of chaos.