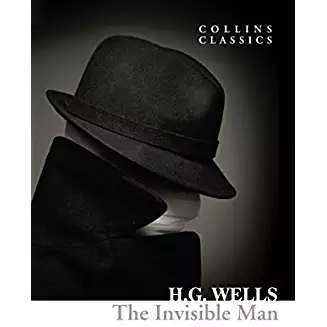 If I could, I would use H.G. Wells’ time machine to go back to a particular day at Warwick University during the autumn of 1983.  I was sitting in a student kitchen listening to a science post-grad telling me, a humble first year English student, that he was pursuing worthwhile work researching a cure for the common cold.  He further informed me that courses in literature were a waste of time and money.  Stepping out of my time machine, I would produce a copy of The Invisible Man and push it across the table to Mr Cold Cure.  I would tell him that this is a tale of a scientist named Griffin who makes himself invisible.  Griffin is an arrogant man who thinks that normal limits do not apply to him. His story shows that arrogance in science is the same as arrogance anywhere.  As well as turning him into a monster, this arrogance also makes him a bad scientist.  Scientific work pushes back the boundaries of human knowledge, but the careful business of seeing things often involves helpful limits to our vision.  Take the example of X-rays, which pass through skin, but are only useful in showing the details of bones because they cannot pass through bone.  The Invisible Man has found a way to take away all appearances and reveal what lies beneath.  But take away too many appearances and there’s nothing left.  Consider the eyes we use to see things.  They are only able to see anything at all because the retina absorbs light.  Notice how the retina is the last thing to resist Griffin’s invisibility experiments.  If the retina becomes transparent, letting light through, we would lose the power of sight.  A real transparent retina would not work, and symbolically the retina makes a last stand against the scientist, against his arrogant confidence that he can see everything.

Notice also, I would declare, warming to my subject, that the Invisible Man, puffed up with his achievement of invisibility, finds himself living amongst simple Sussex folk in the village of Iping. Griffin, the great scientist, might feel himself superior to innkeepers, farmers, village Bobbies and students of literature, but seeing too much is the same as not seeing anything at all.

Keep the book, I would say. And, oh, by the way, where I come from in your middle-aged future, the common cold is as common as ever.  Then I would step back into my time machine and return to the present day.