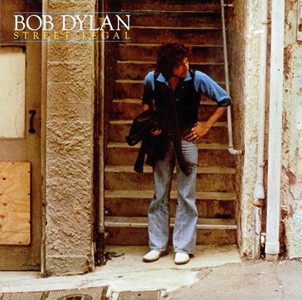 Street Legal is Bob Dylan’s eighteenth studio album, released in 1978. It peaked at number 11 in the Billboard Charts, the first time a Dylan studio album had not reached the top 10 since 1964. Though Street Legal might not be Bob Dylan’s most commercially successful and critically acclaimed album, I think it has one of the best names of any album ever made. This two word title is a poem in itself, summing up the general direction of the album, and saying something profoundly true about the nature of communication.

So let’s have a think about these two words, street legal, which refer to a vehicle licensed for normal road use, meeting various criteria related to equipment and safety. These criteria exclude more rarified or specialised vehicles – racing cars, off road dune buggies, and so on. There is a sense of compromise as Dylan sets out on the road to meet his audience. He has to make sure his lights and indicators are in order. Are his rear view mirrors correctly positioned? Does he have his road tax and MOT documents up to date? He’ll need those if he’s visiting people like me in England. I know this does not sound glamorous or exciting. Something certainly seems to be lost when you decide to step out of a racing car into a Hyundai i10, which was the car I took a drive in at the weekend.

However, as you make that compromise, a huge new world opens up. You’re not racing pointlessly around a tiny track anymore, or jumping over the same old sand dunes. With your indicators and side lights in good working order, a whole new vista opens up. You are now free to follow the road wherever it may lead. This is a vista revealed by the ordinary rather than the special. You don’t have to be a rock star to make this journey. In fact rock stars risk getting left behind, at an exclusive golf club perhaps, riding in a golf cart, which like a racing car or dune buggy, is not street legal.

So here’s Dylan, magically coming through. He communicates not with special powers, but with the power of the ordinary. An album is a communication, a reaching out. It takes a journey from one person to another in a street legal vehicle. When I think of Street Legal, I think of something like Van Gogh’s portrait of postman Joseph Roulin, an ordinary fellow in an unremarkable job. He sits there, unassuming in his bushy beard, dark, buttoned coat, and his station master’s hat with “Postes” in gold lettering across the front. No one in 1888 could help communication between people more than an ordinary postman. The same is true of Bob Dylan in his Street Legal vehicle in 1978.