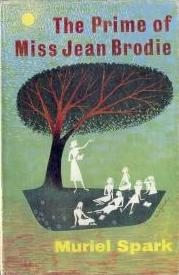 First edition of The Prime of Miss Jean Brodie, published 1961

Miss Jean Brodie is an unconventional teacher at a conventional girl’s primary school in 1930s Edinburgh. Ignoring the curriculum, she gathers her charges under an elm tree in the school grounds, telling them stories of her lover lost in the First World War, and describing visits to Italy. She tells the children how much she admires Mussolini’s fascisti. Hang on, what was that? I went back and made sure I’d read it right, only to realise that, yes, this charismatic spinster is actually a budding fascist. On later trips to Germany she comes back with glowing reports of Hitler’s Brown Shirts.

I had to have a think at this point. It struck me that historically the founder of the German Nazi party was a locksmith. Jean Brodie is a parallel for one of these apparently unassuming but dangerous personalities. She’s not an obvious monster, but is all the more insidious for her apparent ordinariness. She’s like a sunset described at one point in the book, looking like “the end of the world had come without intruding on everyday life.”

The crucial thing is not that Miss Brodie is overtly evil, but that she has her own ideas about good and evil. Her values are focused entirely on herself. She accepts no outside system. As time goes on it becomes ever clearer that she exists beyond right and wrong as judged by society. Jean Brodie decides right and wrong.

Jean Brodie is a shock. But perhaps the biggest shock of the book is the subtle warning that while most people look outside themselves for guidance, whether it’s headmistresses, governments, or religion, all of these sources of authority are created by people. In the end there is no authority beyond people to which they can refer. One of Jean Brodie’s girls takes refuge as an adult in the Roman Catholic Church, an environment which we are told would have ideally suited Miss Brodie. This was an organisation in which there were “quite a number of fascists” who believe what they do is right because it is them doing it.

This is a humorous, beautifully written, frequently charming novel. Fittingly for a story about a teacher, it also has some hard, unsettling lessons.