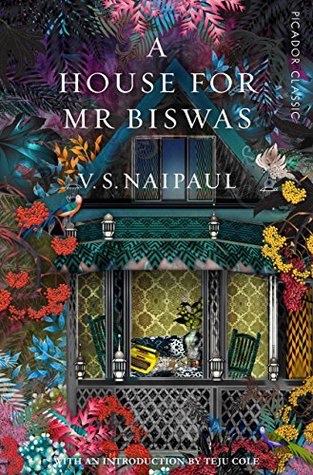 I am reading the Modern Library’s 100 greatest novels of all time to try and help my writing. The problem with this plan is the way many of these books break the rules. This is certainly true of A House For Mr Biswas by V.S. Naipaul.

It is unlikely you will read this book for the usual reasons that people read books. A sympathetic central character? No. Biswas is often argumentative and nasty. Born in the most humble of circumstances, he has a measure of creative talent which sends him on a modest career of betterment and westernisation; but he is hardly a dashing hero. This is no Greatest Showman, “if you can dream it, you can achieve it” production. Romance? No. His relationship with his wife happens by accident, leading to years of scratchy cohabitation where husband and wife barely tolerate each other. The best that can be said is that they end up with some quiet mutual respect. Excitement and anticipation? No and no. The events of Biswas’ life are mundane. I would keep my incredulous daughter informed with updates such as: “he is living with his in-laws in a decaying mansion. He has moved to a small house out in the country. There was a bush fire; they put it out. He has now gone to live in the Port of Spain in a house owned by his mother in law. He is now a journalist. He is now a minor civil servant. He has finally bought his own house which looks alright but is a bit of a wreck.” And so on. As for anticipation, the author starts at the end, a dying man looking back at his life. You know what will happen. The reviewer doesn’t really have to worry about spoilers, because the story simply doesn’t work that way. The whole book is waiting for something to happen that never really does. And you know it beforehand. By all the usual measures, it’s like an anti-novel.

However, with frequent breaks, I kept going, and in the end I was glad I did. At the beginning of Biswas’s life a local holy man reads the omens of the boy’s life, in the way he sneezes, and in the fact that, briefly, he has an extra finger. He does not give a good report. The book is a bit like that. You can read the signs how you like, making perfectly ordinary phenomena into something meaningful, even as they remain ordinary. Apart from the brief period of Biswas’s early childhood, this book is interesting thematically rather than dramatically. If you accept that you will get a lot from it.

Biswas himself tries to learn writing via a correspondence course. He never does write his great novel, but by the time you get to the end of his story you’re wondering what a great novel is anyway.