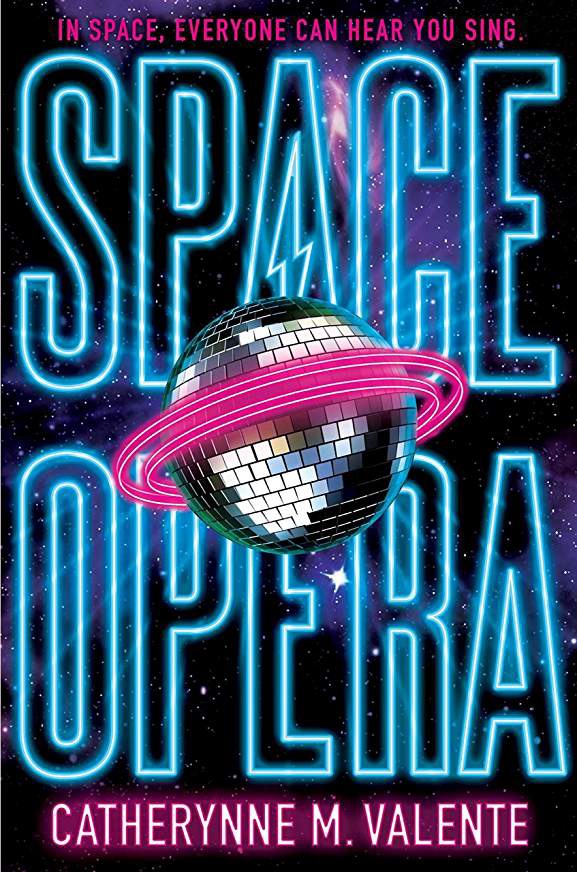 Eurovision in space. I read that Catherynne Valente sold her book with these three words. I bought it on the same basis.

The early scenes are excellent, introducing us to Decibel Jones, a Bowie, Bolan, Essex, New York Doll amalgam of a faded glam rock star. With his band, the Absolute Zeros, he had a short but intense period of success, brought to a shuddering end when one of the founding members died in a car crash. Now Decibel gets by on the strength of nostalgic gigs, typically booked by wealthy middle aged men throwing birthday parties.

Who knows how long Decibel would have continued in this twilight zone of a career. We never find out because the aliens land. Extraterrestrials, who have monitored Earth via our radio transmissions, arrive to judge whether humanity is worthy of a place in wider intergalactic society. The procedure for judgement involves participation in a song contest, staged on a world which had once been the centre of interplanetary war. Because Decibel is something of a favourite amongst influential members of his off-planet audience, he, and the one surviving member of his band, are selected to represent Earth at the contest. As well as the usual nerves that come with being a performer, Decibel faces the additional stress of knowing that the penalty for coming in last place at your first contest appearance, is destruction of the race applying for membership of the wider community of planets.

I enjoyed Space Opera until this point. The characters are, in a Jackson Pollock sort of way, well drawn; and the basic idea of the story, bizarre as it might sound, made sense to me. The idea of a song contest growing out of war was not so far fetched. After all, the Eurovision Song Contest, first held in 1956, was established only a decade after the Second World War ended in Europe. Then when the Cold War ended in the early 1990s, many eastern bloc countries entered for the first time. Eurovision really does seem to emerge from the ashes of war and conflict. In the new order of things, national competition is filtered through the glitter ball prism of fun and music.

However, I couldn’t say that I found the book a complete success. There are long digressions which describe the galaxy’s former wars, and the history of the song contest. We do not see any of this extra material through the eyes of the book’s characters. Instead there is just an overwrought, disembodied author voice telling us about it. Clearly Douglas Adams is an influence on Space Opera, but in his books the amusing, tangential stuff generally comes to us through Adams’s famous invention, the vast and not always reliable, Hitchhiker’s Guide to the Galaxy, designed to help a space traveller find his way around the galaxy on less than thirty Altairian dollars a day. There is no such framing device in Space Opera, and it suffers as a result. I found myself tending to skip the digressions so that I could get back to the story as told by the characters in it.

Overall, this book was not douze points, or nil points. It was somewhere in between, with some nice key changes, a group of chaotic backing dancers and over the top staging. So I think it would get a seven or eight from this jury. A good effort, but better luck next year.