Out on my usual weekend bike ride recently, I ended up in the village of West Malling. Seeking a cup of tea and something to eat before riding home, I found that my favoured West Malling tea shop, The Hungry Guest, had diners overflowing through the open shop front onto a sunny pavement. There was no tea to be had there. Pondering my next move I spotted a blue plaque on the wall of an establishment calling itself the Rain Grill. It had the air of a tiny public library, which for some reason had a sign over the window showing pictures of hotdogs and kebabs.

What was a blue plaque doing on a building like this? I went closer to have a look.

FILMED THE START OF

Getting home after my ride, I decided to find out more. It turned out that the Rain Grill was a newsagents in 1967, where John sells tour tickets to Ringo at the beginning of Magical Mystery Tour. This was part of extensive filming in the village and at the nearby airfield. Reading about the famous I Am The Walrus section, I learned that the vaguely post apocalyptic setting for the performance was actually an area of monolithic anti-blast walls at RAF West Malling. That area, and the airfield it was part of, have both now disappeared beneath a housing development called Kings Hill, which I actually rode through on my way home.

It seemed a shame the Beatles were not commemorated in the road names of Kings Hill. There is no I Am The Walrus Close. Deciding to become a pop archaeologist – which I know is not a real job – I set to studying maps and pictures, trying to work out where the blast wall location used to be. There were two groups of walls protecting aircraft dispersal pens, one to the east of the airfield and one to the south. The Beatles used the eastern group.

Have a look at this still from the Magical Mystery Tour shoot: 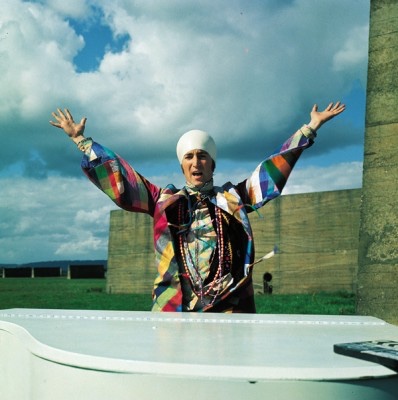 John is standing beside a dispersal pen, a series of blast walls marching away in a line to John’s left, the North Downs visible in the background. This would put him roughly in the location indicated by the red arrow on this 1960 aerial view of the airfield, overlaid with a street plan of Kings Hill. I have circled the sequence of dispersal pens visible behind John:

The overlaid street plan seems to indicate that the photo of John and his piano was taken in the vicinity of what is now a roundabout where roads called Beacon Avenue and Glenton Avenue meet.

I rode back to Kings Hill a few days afterwards, taking a mystery tour of my own. There was a certain thrill in setting out to find a roundabout, rather than, say, Buckingham Palace.

Here are the results of my adventure. As far as I can tell, this is the same view as that seen in the Magical Mystery Tour photo, 52 years on:

You can see the top of the North Downs behind the roundabout. Where the sequence of blast walls once stood there is now a public garden. Perhaps we can see a faint visual echo of the lost walls on the roundabout, which is topped by a blocky installation of broken stone, as seen below:

So that concludes my little piece of pop archeology. It might only have taken me to a roundabout, but such a humble destination seems oddly fitting when you’re thinking about a mystery tour.

Pop philosopher is no more a real job than pop archaeologist, but I will leave you with this thought – it’s the idea itself of a mystery tour that is the most interesting place it takes us. A mystery tour is a journey carefully planned so that the people taking the trip don’t know what the plan is. There is a mixture of purpose and aimlessness about it – in fact aimlessness is the entire purpose of the trip, an idea which I came to see as rather inspiring. Next time you feel lost, try thinking of your situation as a magical mystery tour where not having a clue where you are and where you’re going is all part of things proceeding just as they should. It’s a different way of expressing that famous line from All You Need Is Love: “there’s nowhere you can be that isn’t where you’re meant to be.”

I’ve had some fascinating messages from people reading this post. Below is a photo I received from Lisa Grieger who visited Kings Hill in 1997, just as work was starting to change West Malling Airfield into a housing estate. She blagged her way into the site and took some great photos! This is her picture of the perimeter road where Ringo drove the tour bus. It’s very poignant to see this road, just as it was about to disappear. Thank you Lisa.

In the next picture, notice the small concrete patch just beside the wheel of Lisa’s car. The airfield blast walls would have been arranged beside the perimeter road. Is that patch of concrete a last remnant of the blast walls? I like to think so….

Talking of possible remnants of the blast walls, ever since writing the original article I have hoped to find some trace of them. Every bike ride through the area has been a little research trip. It was on one of these expeditions that I recently noticed a group of what looked like boulders beside a path on the edge of Kings Hill. Here they are, with an old airfield perimeter gate visible in the background…

A few boulders you’re thinking; just the wishful thinking of a Walrus researcher? But these aren’t boulders. Have a closer look at the large rock closest to the gate. There’s an outline of brick beneath what was obviously a concrete casing…

These apparent boulders are man made, clearly a part of some former structure. Big, brick structure covered in concrete? They are next to a gate, so I suppose they could be the remains of a pill box. But a couple of the “boulders” are substantial and seem to have come from something massive.

Also interesting are the big chunks of concrete pictured below. They are used as barriers to close unused roads in the Park Drive area where blast walls once marched away behind John and his piano. Once again this is probably wishful thinking, but the holes in the blocks are intriguing – they remind me of the holes through which some of the Walrus scenes were filmed. Of course these could just be heavy-duty traffic barriers, but they are fitting for the place if nothing else. 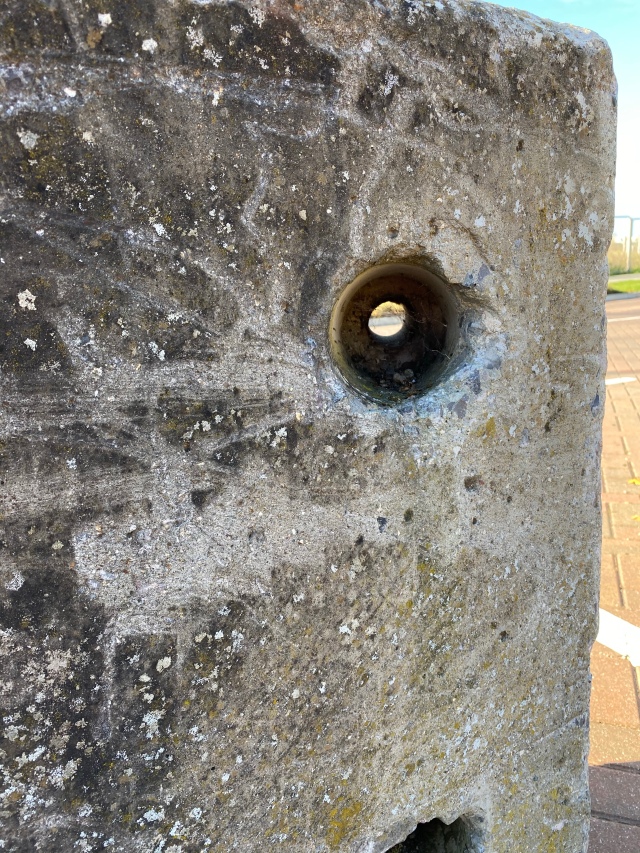 Do I hear echoes of I Am The Walrus through this hole? Who knows. It’s a mystery.

Just for sake of completeness, it looks as though most of the footage for I Am the Walrus was shot in two locations – the one near the roundabout I have explored here – where the more surreal sequences seem to have been filmed, and a second location close by, on a slip road with trees in the background, where the band appear more like their recognisable selves. Others have suggested that this second location lies in Durello Avenue, which corresponds closely with the old slip road- see this link for example http://kenwoodlennon.blogspot.com/2011/08/west-malling-kings-hill-durello-avenue.html

Here is my own photo of Durello Avenue… What a great place for a mystery tour to end.