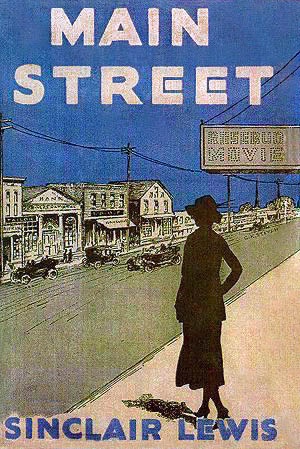 I didn’t know where to start a review of this book, so I decided to start at the beginning. The Puritan settlers are on the Mayflower sailing for the New World. What sort of main streets would they eventually have in their towns? Well, these people are famously seeking freedom, so it is unlikely they would be big fans of someone telling them how to build their town. On the other hand, they are not seeking freedom in the sense of running through meadows with flowers in their hair. Puritans are religious fundamentalists. They are looking for the freedom to be just as fundamental as they want to be.

So come forward a few hundred years and what do we find? We find a book about the odd, contradictory towns that evolved in America, trying to express freedom and fundamentalism at the same time. Sinclair Lewis’s Main Street, published in 1920, tells the story of Carol Milford, a clever and ambitious young woman, who at college harbours dreams of a career as a town planner. However, she marries a doctor, who persuades her to settle with him in Gopher Prairie, Minnesota. Gopher Prairie is about as far from town planning as you can imagine. This place has grown up piecemeal, as a centre for surrounding farms, where farmers can sell their produce, access a few basic services, and buy some essentials. The very fact that the town evolved in this unplanned manner, is supposedly an expression of the freedom of the American way. And yet there is also plenty of Puritanism about Gopher Prairie, curtain twitching, moralising and judgement. You can only be individual here in a narrowly accepted manner. If you are really out of the ordinary, a fey young man with artistic ambitions, or a young woman with new social ideas, the town’s idea of freedom will probably not extend to you. Ironically there is a sense of standardisation about this town which supposedly grew up in such a freewheeling rugged, individual, American manner. Carol discovers that ramshackle Gopher Prairie is virtually identical to many other towns in the American Midwest, as though they had all been laid out to some standard scheme.

Sinclair Lewis’s Main Street is a long meditation on this peculiarly American combination of freedom and rigidity. It’s a big, sprawling book with no discernible plot, like a soap opera; but it’s lack of plot seems carefully planned. It’s not the most obviously exciting read, but it finds danger, excitement and drama hidden in the every day. There are a lot of scenes in kitchens, involving gossip, scandal, cooking, and the odd amputation of the injured limbs of farmers.

There were times when I wondered why I was wading through this interminable description of small town life, but I kept on going and was glad I did. Main Street is a good way to understand America and Americans, especially today as the country struggles with leaders of government who display aspects of dictatorship and chaotic incompetence, in lethal combination.